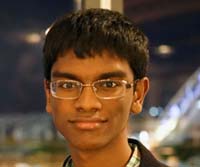 I have always been interested in math. From a very young age I was enthralled by the pattern recognition problems which my parents gave me. Math fascinated me because of the simple yet elegant beauty associated with proving seemingly intractable statements about numbers. My obsession with math led me naturally to the math competition scene, and my exposure to the Art of Problem Solving allowed me to understand math beyond the school curriculum. I gradually overcame the hurdle of solving problems that I had never seen before and further trained my quantitative abilities.

When I entered high school I became interested in modeling the physical world using mathematics. My freshman year physics teacher, Mr. Spenner, taught me how classical physics was simply a quantitative way to view the motion of the world. I realized that I could apply my mathematical problem solving ability to understanding physical phenomena, and that this had far more powerful real-world applications. Facts such as the Fundamental Theorem of Calculus were much more powerful when expressed in the form of work-energy relationships, that allowed me to simply model complex mechanical phenomena.

My research project in protein docking was my first experience with applying physics to the real world. Inspired by Mr. Spenner I decided to pursue a physical model that described the fundamental laws behind molecular interactions. In order to derive these laws, I studied physical chemistry to understand the differences between classical and quantum modeling of atomic interactions. This research experience was invaluable as it taught me that while it is often more difficult to use physics to model molecular phenomena, it is also more powerful.

My experience with the physics olympiad began in my freshman year when I first took the F=ma exam with little knowledge of mechanics. Since then, I have always been intrigued by the semifinals problems; while simple, these problems are elegant examples of the power of elementary physics. I am thrilled to be part of the Physics Team this year and I will enjoy solving physics problems with my fellow teammates.