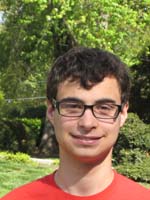 Who am I? I'm a person who likes his textbooks long, his equations short, his bagels well-done, and his meat medium-rare. I am one of the happiest people I know, I am close to my entire family, have more friends than you can count on your fingers (unless you can count to 1023), and I've written both a novel and a paper on quantum physics (not something I'd want to show to strangers, I probably made some embarrassing mistake somewhere).

Like most of the people on this team, I started life as a math person. I became a physics person, not because of some grand design on my part or a deeply held conviction that bouncing balls are more interesting than linear systems, but because of a series of happy coincidences. It all worked out in the end, though, because now I feel that quantum spin is inherently more interesting than projective geometry (whatever that is), and I know that taking the road less traveled was the right choice, because I can look at the road more traveled and see how I'm happier.

One other interesting thing about me is my last name. It used to be Winer (it rhymes with miner and diner and finer and liner). But some people insisted on pronouncing it like to rhyme with meaner, keener, and cleaner. This sort of thing can be a big deal when you're a third-grader. So what did I do? Did I consign myself to live the rest of my life in shame and disgrace because some substitute teachers don't know how to read? No. In my typical fashion I made up new rules for life and adjusted circumstances. I renamed myself Mike Winston, and became (to my knowledge) the first person in the history of the universe to have a nickname for both his first and last names. Michael Winer to Mike Winston. Check it out. I do this a lot. I take my own mistakes, or my silly ideas, and I run with them, turning them into my defining moments. I invented the word 'brazoo' in this fashion. It's how I got the title SuperResponsibleMike. It's why I have a theme song, a catchphrase, and a signature look (rubber bands on the wrists because rubber bands are awesome, jacket on because you're too lazy to take it off). I am firmly of the belief that any mistake I make is hilarious. Okay, that's not true, but it's the point I want to get to. I don't plan on making mistakes too big to laugh at, and I think life will be better if my worst moments are a comedy show.

Well, here we are. You've reached the end of my autobiography. You deserve some sort of reward. You clearly like both science and my sense of humor, or you wouldn't have made it so far. So why don't you check out my blog at heroesandscientists.blogspot.com?