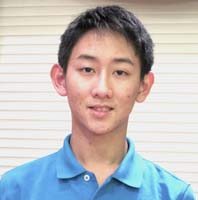 My grandmother, once a math teacher, instilled in me an interest in math. To challenge myself, I began participating in contests such as MATHCOUNTS and the AMC in middle school, and I've enjoyed the opportunities to hone my critical problem solving skills. In high school, I have taken many advanced topics courses, including calculus, multivariable calculus, differential equations and linear algebra-courses that further developed my mathematical foundations. These skills have carried over into my passion for physics, as I search for elegant solutions to complex problems.

My first exposure to physics in seventh grade was brief but inspiring. I spent the following summer reading one of my brother's old physics review books to get a deeper understanding of classical mechanics. In eighth grade I joined a weekly class, and after four months of study, I was able to become a semifinalist. Since then, I have studied AP Physics B and taken AP Physics C at school, and together with my math classes, I learned the tools I needed to understand physics at a deeper level, in order to challenge the semifinal exams.

In the past two years, my interest in physics has also expanded beyond academic courses. I especially enjoy astronomy because the larger world beyond our biosphere fascinates me, especially the lifelike cycles that stars go through. I've always enjoyed shows like NOVA and Through the Wormhole, which fueled my interest in the extraterrestrial. After my freshman year, I was lucky to find an astronomy internship opportunity, where I've spent the past two years researching stellar elemental abundances, analyzing spectral absorption lines to validate two competing models and gain insight into the development of the Milky Way.

To me, physics is both interesting and useful. It satisfies my innate curiosity in how the world works, and I am consistently amazed at how simple concepts and equations can drive diverse phenomena in the universe.

I also enjoy performing arts. I have been playing piano since I was five, competing in competitions and performing at Carnegie Hall. I also enjoy dancing (especially hip-hop) and will be part of my dance studio's competitive hip-hop team. I also love singing and have recently picked up a cappella.

I am honored to be a member of the physics team. I'd like to thank everyone who has supported and encouraged me along the way, and I'm looking forward to meeting the rest of the team members!