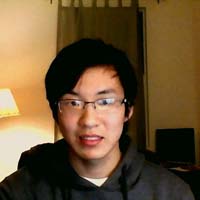 Here's a welcome surprise - my first task as part of the 2014 Physics Team is not to do physics but to write in coherent English, something that as a second semester senior I haven't done in a while. Senioritis is real.

My story is pretty typical. Over on the west coast in sunny SoCal, I was once a pretty typical guy from a pretty typical school with pretty typical interests. As I grew, I participated in the spectrum of acronymic math competitions, then decided that math was oftentimes too theoretical and entered a physics competition junior year because a friend made Team (and, admittedly, because "AP Fizz" sounded cool). On my first F = ma, my innate skill for obtaining three (!!) right answers with faulty reasoning helped qualify me for semifinals. The day of semis, though, after flipping through the pages for maybe half a minute, I proceeded to hand the stack of questions back to my proctor to avoid fighting through the next 3 hours in fruitless frustration (all the variables from 2013 A1 does make your head spin a little). Needless to say, next year I studied a bit more and did a bit better.

But over that year, I recognized physics' universal appeal. It took all the problem-solving elegance of math and applied it to the scope of real-world problems. More than simply a vortex of facts and figures, physics defines a set of laws that governs nothing less than the entire universe and everything in it. Which is pretty awesome, if I may say so. Enough said.

What else do I do? Through the years, I've enjoyed such pastimes as linking others to Onion articles, wearing flip-flops in a futile attempt to rid myself of a stubborn sock tan, decorating my notebook with Starburst wrappers, and most recently, occasionally humming "Let it Go". I am 24/7 on the lookout for chocolate and am (sometimes) a casual origami enthusiast. Sometimes I philosophize (philophosize? philosophosize?), and in turn sometimes it makes my head hurt. But in a good way...

...just like physics does. They say that greater challenges offer greater rewards, and learning how and why nature works the way it does is definitely worth it. Through it all, I'm thankful to anyone who's ever supported me, personally or intellectually, in these endeavors and opportunities - I wouldn't be here otherwise. This fall, I'm looking forward to joining the dynamic scene at MIT to pursue a degree in engineering (don't know which yet), but in the meantime, I can't wait to meet everyone for an exciting ten days in Maryland!