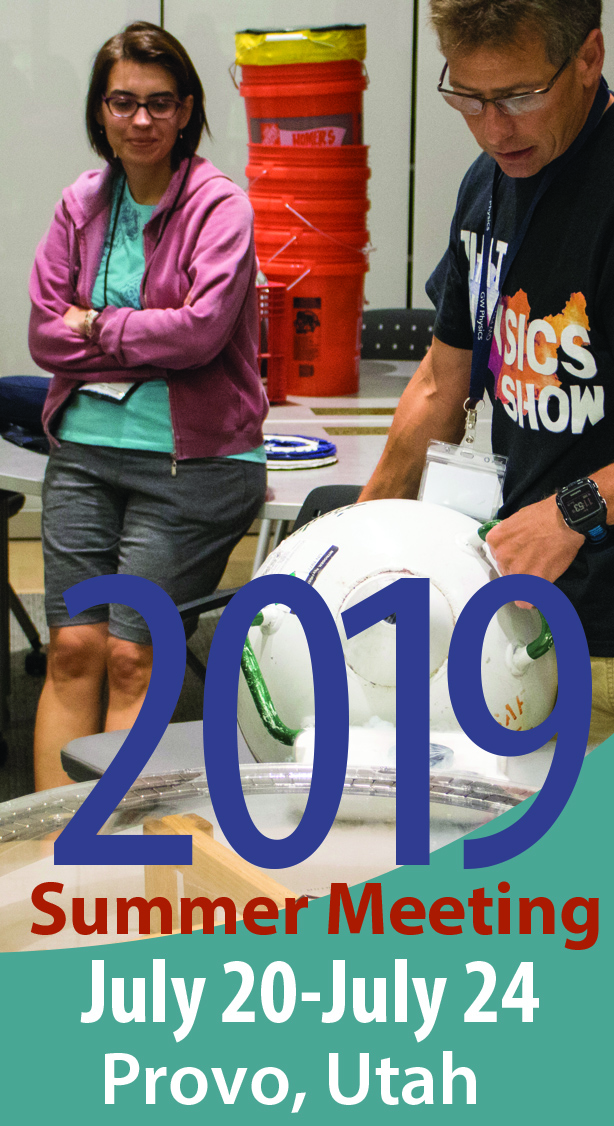 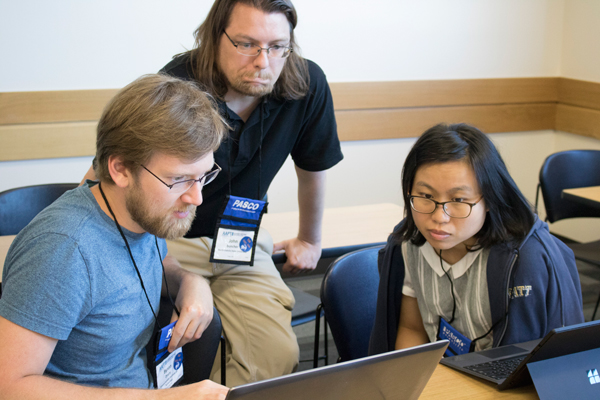 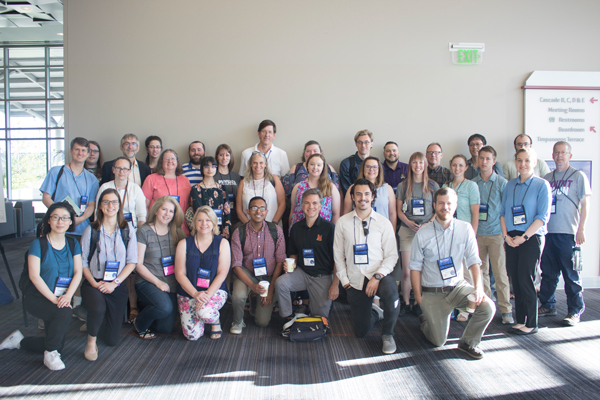 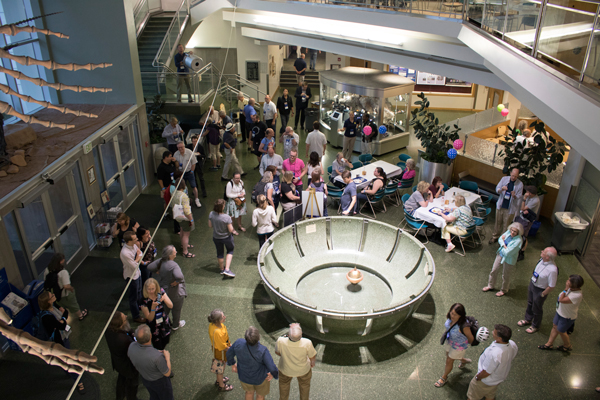 Nearly 1100 physics educators came together in the land of towering mountains and blue skies to participate in the 2019 Summer Meeting. With this meeting being held in Provo, Utah attendees recognized that the place where they were assembled is traditional Native American land during a ceremony at the Welcome reception. They were able to participate in a “Days of ‘47” rodeo and enjoy other celebrations relating the the anniversary of the first pioneers in Utah along with a full week of physics education.

Physics Education Researchers participated in the post-meeting PER Conference, Physics Outside of the Classroom: Teaching, Learning, and Cultural Engagement in Informal Physics Environments (https://www.compadre.org/per/conferences/2019/). 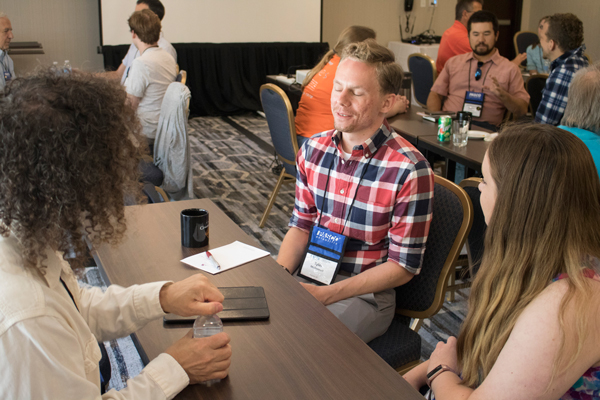 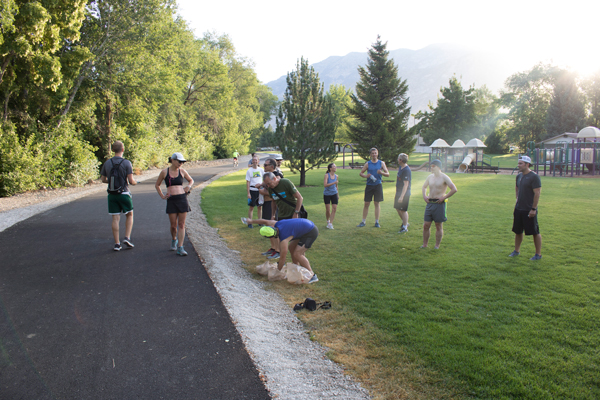 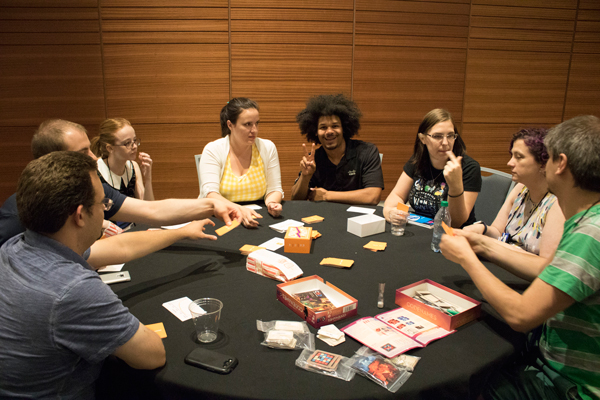 The AAPT Fun Run/Walk continues to be a popular event providing a break from the intense learning format of the meeting and the Speed Networking event, providing an opportunity for new physics educators to interact "one on one" with seasoned professionals, continued to grow. Much anticipated features of the Summer Meeting, The High School Physics Photo Contest and the Apparatus Competition, are always highlights and this year the entries were exceptional. 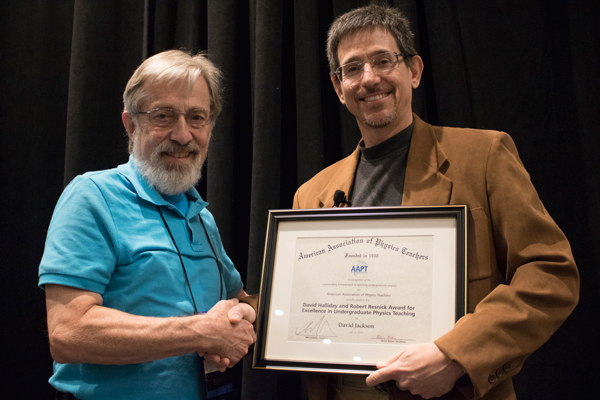 The Halliday and Resnick Award for Excellence in Under Graduate Physics Teaching was presented to David Jackson from Dickinson College, Carlisle, PA. His talk, Helping Students Have Meaningful Learning Experiences in Physics, focused on the best way to help students learn.

Over the past several decades, a significant amount of research has gone into trying to answer this question. Two lessons that have come out of this research are: (i) that lectures are much less effective than any of us would like to believe, and (ii) that getting students actively engaged in the material is essential for effective learning.  Ultimately, he noted that the best we can do is to try to provide meaningful hands-on experiences to our students, and then guide them through the steps needed to develop an understanding of the situation. In this talk, he gave several examples of such experiences. 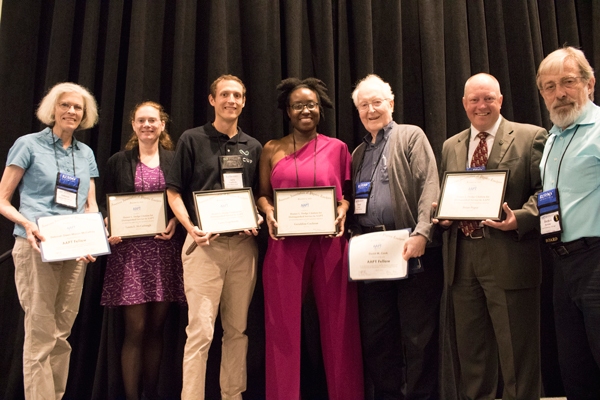 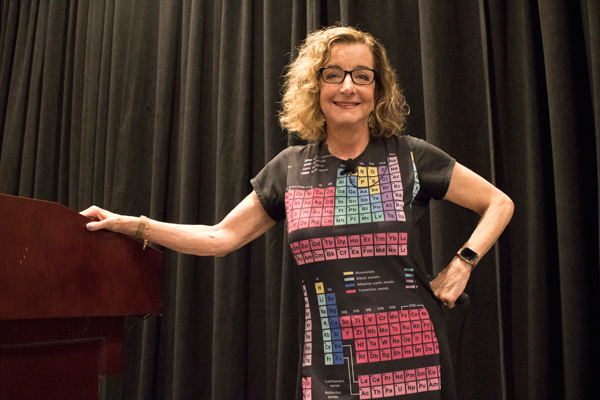 On Monday afternoon AAPT hosted a Plenary, Correlated Electrons: The Dark Energy of Quantum Materials. Laura Greene, physics professor at Florida State University and Chief Scientist at the National High Magnetic Field Laboratory, is noted for her research on Andreev bound states and is an expert in strongly correlated Fermionic systems. During the discoveries of the first high transition temperature (Hi-Tc) superconductors she and collaborators from AT&T laboratories, were amongst the first to report on the role of oxygen and crystal structure in the copper-oxides. Laura Greene is a champion for diversity and is active in promoting equal rights for women and minorities. She is a member of the Department of State supported COACh team, an organization for assisting in the success and impact of women scientists and engineers.

During this Plenary, Matt Blackman received the PhysTEC Teacher of the Year Award.  Blackman has been teaching AP Physics in New Jersey for ten years, where he dramatically increased AP enrollment and student AP scores at both Madison and Ridge High Schools. Specifically he has worked to improve the ratio of female to male students taking AP Physics, increasing it from under 20% to over 50%. 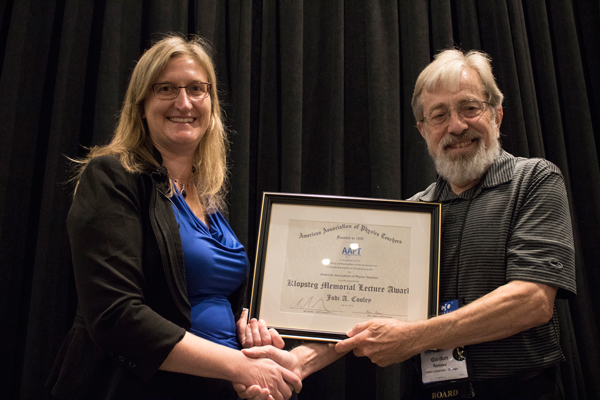 The Klopsteg Memorial Lecture Award was given to Jodi Ann Cooley, Southern Methodist University.  Her talk was Fantastical Dark Matter and Where to Find.  It discussed the history of dark matter research and how scientists are trying to uncover the properties of this evasive matter. Only a small fraction of the universe is made from ordinary, visible matter. A much larger portion remains dark, its existence known to us only by its interactions through gravity.

The first evidence of this dark matter originates from studies of celestial bodies in the late 1920s and early 1930s. Since that time, astrophysicists and astronomers have determined that it constitutes the bulk of matter in our universe. Despite this fact, the composition still remains unknown. 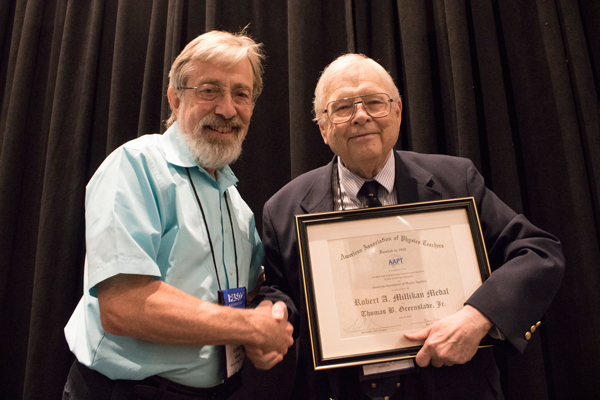 Tom Greenslade, emeritus professor of physics at Kenyon College, Gambier, OH, received the 2019 Robert A. Millikan Medal for his notable and creative contributions to the teaching of physics. His talk, Adventures with Oscillations and Waves, informed attendees about Robert A. Millikan and the apparatus that he designed for the introductory physics courses at the University of Chicago at the turn of the twentieth century. He then shared how an interest in oscillations and waves sparked his interest and kept him going in the required first year physics course at Amherst College in the mid-1950s. After arriving at Kenyon College in 1964, as the youngest faculty member at the College, he discovered a “back room” full of delightful physics apparatus from the nineteenth century, and learned how to use them in demonstrations of oscillatory phenomena. Later he was able to start a new course for sophomore physics majors called “Oscillations and Waves” that made full use of Tony French’s text with a similar title. Here he was able to devise a full set of experiments, some old and some that he developed. As we saw, there is more than one way to swing a pendulum!

Claire Gmachl received the PhD degree (sub auspicies praesidentis) in electrical engineering from the Technical University of Vienna, Austria, in 1995. In 1996, she joined Bell Laboratories, Lucent Technologies, Murray Hill, NJ, to work on Quantum Cascade lasers and microcavity devices. Mid-Infrared Quantum Cascade Lasers and Applications, she explained that Quantum Cascade (QC) lasers are a rapidly evolving mid-infrared and THz semiconductor laser technology based on intersubband transitions in multiple coupled quantum wells. The lasers’ strengths are their wavelength tailorability, high performance and fascinating design potential. They find primarily application in trace-chemical sensing for applications in environment and health. She first gave a brief introduction into QC lasers followed by a discussion of several recent highlights, such as the quest for high performance QC lasers and the implementation of unconventional laser schemes and new materials for intersubband devices. She also briefly touched on several applications, such as field campaigns of QC laser-based sensing, and her recent work in non-invasive in vivo glucose sensing. The work presented was conducted in collaboration with many valued colleagues in our own research group and across MIRTHE. 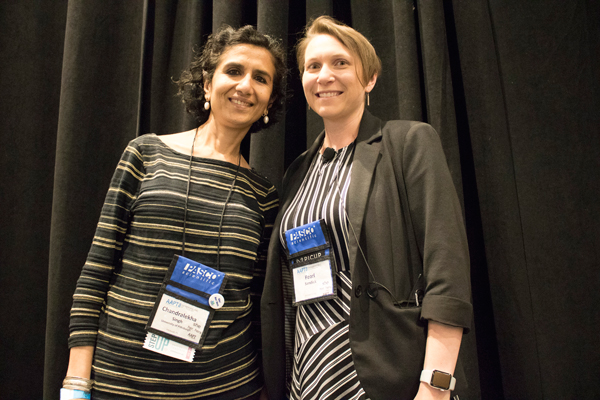 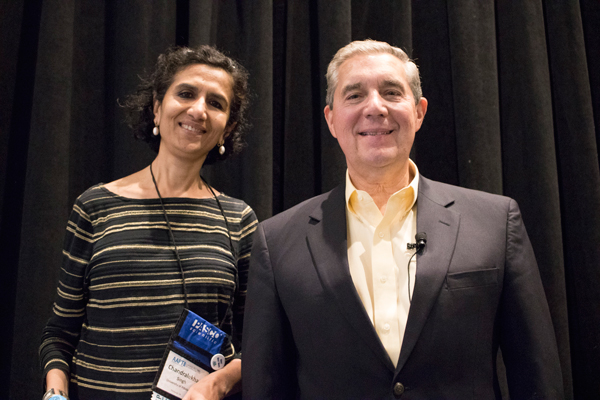 The APS Plenary, co-sponsored by the American Physical Society Forum on Education, featured Pearl Sandick from the University of Utah. In her talk, WIMPs in the Sky, Sandick noted that The question of the identity of dark matter is one of the most important outstanding puzzles in modern physics. Of the many potential explanations proposed, perhaps the most-studied is a new species of elementary particles called Weakly Interacting Massive Particles (WIMPs). The properties of dark matter are being probed in a variety of ways, for example by terrestrial experiments buried deep underground as well as satellite experiments looking for signals from space. She discussed the prospects for “discovering” dark matter, focusing on the indirect detection technique, and how WIMPs may reveal themselves via signatures of their annihilation or decay in and around our Galaxy.

The other invited APS plenary speaker was Jack Burns, University of Colorado.  Burns is director of the Network for Exploration and Space Science, a $3.6 million center of excellence funded by the NASA Solar System Exploration Research Virtual Institute.  His talk, Hydrogen Cosmology: Observing the Dark Ages of the Universe from the Farside of the Moon, covered Cosmic Microwave Background photons decoupled from baryons, the Dark Ages epoch, eventually collapsing into the first stars and galaxies during the subsequent Cosmic Dawn and up to the Epoch of Reionization,  He described the results of a NASA-funded concept study for the Dark Ages Polarimeter PathfindER (DAPPER), operating in a low lunar orbit above the radio-quiet farside. DAPPER will use the Dark Ages trough to investigate divergences from the standard model and new physics such as heating or cooling produced by dark matter.

DAPPER’s science instrument consists of dual orthogonal dipole antennas and a tone-injection spectrometer/ polarimeter based on high heritage components from the Parker Solar Probe/FIELDS, THEMIS, and the Van Allen Probes. DAPPER will be deployed from the vicinity of NASA’s Lunar Gateway and transfer to a frozen 50×125 km lunar orbit using a deep space spacecraft bus which has both high impulse and high delta-V. This orbit will facilitate the collection of radio-quiet data over a 26 month lifetime for the mission.

AAPT invited attending members to participate in the President’s Town Hall and work with the Board of Directors to enact the new Strategic Plan. During the next few years we have decided to focus on the following subset of strategies:

One way to tie these synergistic strategies is to work toward addressing AAPT’s priority of supporting equity, diversity, and inclusion in physics through the development of programs, products, and services for students and teachers at all levels. 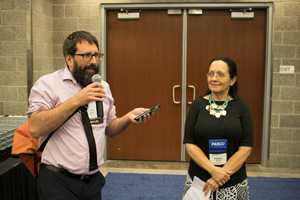 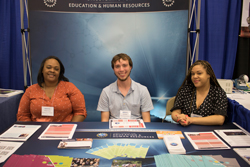 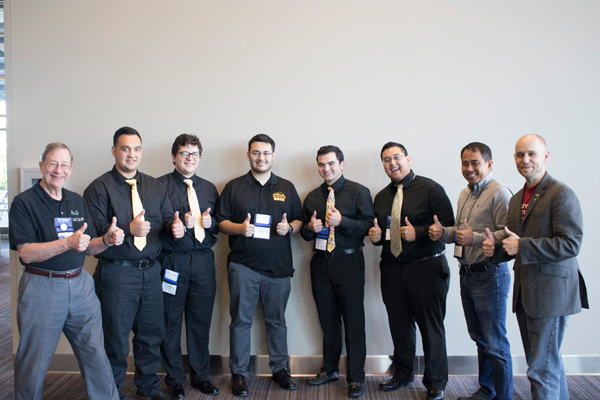 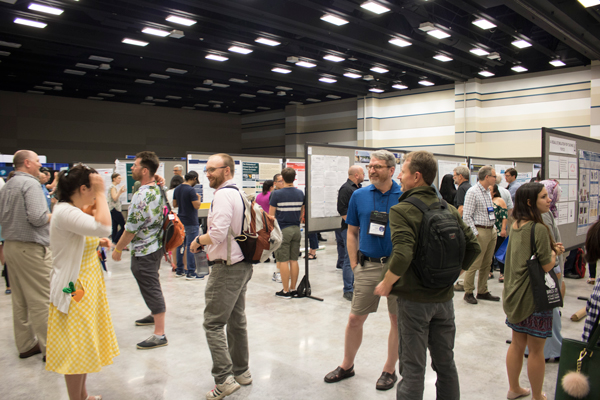 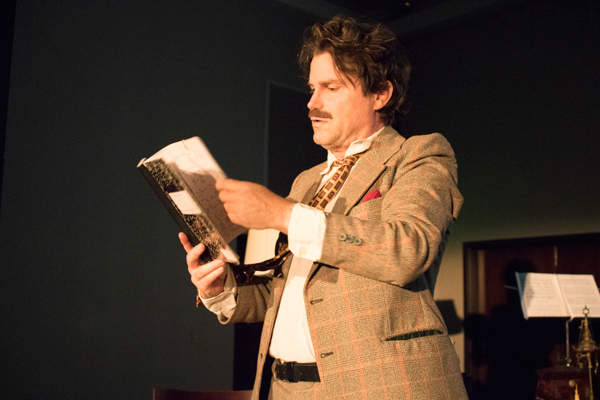 We thank PASCO for sponsoring the badge holders, Vernier for their support of the 5K Fun Run Walk and Utah Valley for extending a warm welcome to Provo. Our thanks, also, to Klinger Educational Products for sponsoring the conference bags.