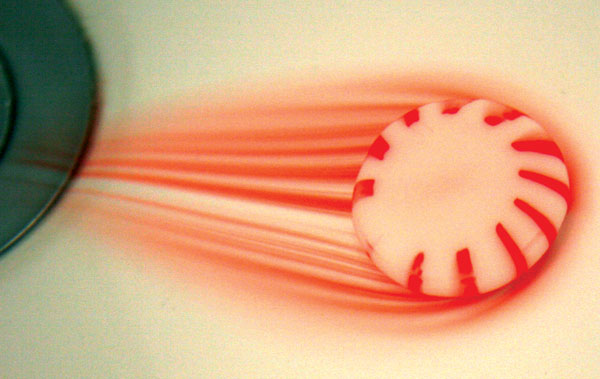 This photo was taken entirely by accident. The candy fell into the sink and then sat there for a few seconds. The running affect was instantly seen. After a quick shot the photo was then looked at more in detail. The photo used many points of physics to look so amazing. Laminar flow does an excellent job of making the red color wrap around and go down the drain in a fine point. The drain was slowly letting water leak in thus pulling the water around the candy. Laminar flow states that when a steady flow of water is put around an object it will spread out to surpass it. The water will then go back into the fine point it previously was in. Density also played a big part in this photo. The density of the dissolved candy solution is much heavier than water. If the density of the dissolved candy solution was the same as water the red lines seen in the bottom of the sink would not have been seen. However, the density was not so heavy that the particles could not have been moved. This idea could be repeated with any type of candy