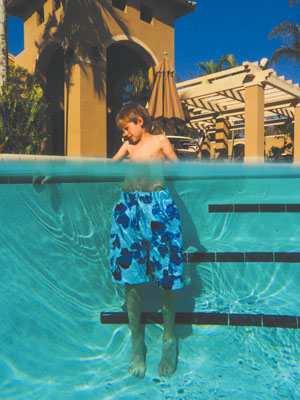 When light goes through water or any vacuum other than air it bends. In water an object may seem larger and closer than what the object appears to be at the surface. This is called refraction: the bending of light when passing from one transparent material to another. The formula for refraction is described in Snell’s Law. The equation for Snell's Law is n1sinθ1=n2sinθ2. N=1 while θ1 is the angle between the ray and the normal in the first medium. θ2 is the angle between the ray and normal in the second medium. When a light bends through water the frequency stays the same while the wavelength varies causing the change in the direction of the ray, making the object appear closer and larger underwater.