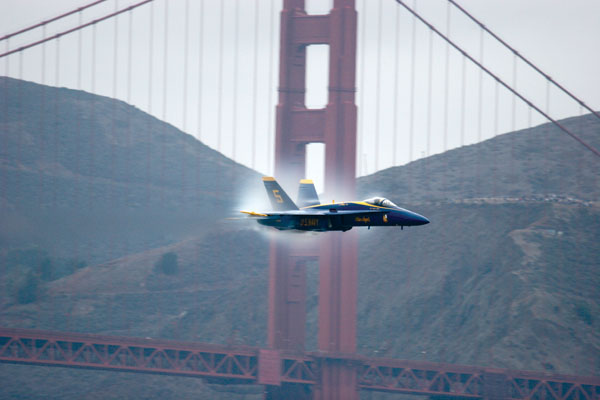 This photo was taken during the US Navy's annual Blue Angels Air Show in San Francisco in 2009. The weather was cloudy, and the humidity was likely high. The increased amount of water in the air allowed the condensation cloud to form at speeds lower than normal, allowing a picture of this rare event to be taken. The effect is best explained using the Prandtl-Glauert Singularity and Bernoulli's Principle. In the photo, the aircraft is traveling near the speed of sound and shows a compression of the water vapor in the air surrounding the plane that lasts only for an instant. This is due to a compression "wave" that is created by the plane at high speeds. Because the location of the wave is dependent on the location of the plane, the condensed vapor seems to follow the plane instead of forming at one point and dissipating immediately. Because the compression wave moves along with the aircraft, the cloud that is seen does not move along with the aircraft, but rather is composed of air molecules that are in turn condensed and rarefied in a very short amount of time. In this picture, due to the slower aircraft speed, the cloud is spread out more across the length of the plane, and is not a well-defined cone. The process is adiabatic (it does not gain or lose heat during the process), ensuring that it does not violate the law of conservation of energy.

Editor's Note: In the photo, the aircraft is traveling near the speed of sound and shows condensation of the water vapor in the low pressure air surrounding the plane that lasts only for an instant. This low pressure is generated in an expansion region that immediately follows the high pressure compression "wave" created by the plane at high speeds.