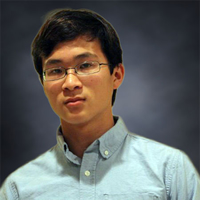 I've always had a sort of penchant for math and the natural sciences; I'd read science encyclopedias cover to cover (mind you, it was a kid's version, given as a birthday present) when I was six-so much so that it's fallen apart. I learned about square roots when other kids were doing basic addition, and I stuck keys into an outlet out of curiosity about electricity. I took apart remote controls and put together gazebos for fun (with my father as a minion). I went to numerous science summer camps to satisfy my appetite for science, and I learned math on my own, reading Challenge Math which would, in 4th grade, teach me all the math I would need to know for the rest of middle school (and math class became extremely boring from there on).

In late 4th grade, I found an outlet for my math ability-I discovered the AMC 8, and I did fairly well, if I do say so myself. I began to focus on math-I started reading the Art of Problem Solving series. Steady improvement followed-I made the AIME in 7th grade, the USAJMO in 8th, and won that in 10th grade. However, in middle school I took an Industrial Tech class, and that introduced me to the practical side of life-we got to play in a machine shop, weld, CAD things, and I began to like engineering as much as-if not more than-pure math, so I began to branch out into physics, robotics, and programming.

I started out programming with visual BASIC at home, and I tried to take week-long summer classes in Java (which taught me what I could have learned from the internet in a few hours). I created a website for my father's startup, Eneron, Inc. I joined our school's robotics team in 10th grade-as a programmer-and I found it a much more exciting and social experience than math competitions. Over the course of one and a half months in 2012, I put in a good couple hundred hours into working on our school's robot, and I did it again in 2013. For three months each year, my life revolves around robotics.

I learned of the F=ma competition in 9th grade, and I delved into it, going only by what I had learned in eighth grade physics (plus that encyclopedia). I managed to make it to the semifinals! I was amazed at how far I got with my lack of knowledge, and I wanted to learn more and do better. I convinced the school administration to let me take Physics APC in sophomore year, and over the summer I coerced Foothill College to allow me to take Physics 4C-thermodynamics and waves. In retrospect, getting into those classes was probably more difficult than the classes themselves-but thanks to those breaches in protocol, I was finally ready for this year's physics olympiad.

I'd like to thank all the people who helped me get to this point-Mr. Booth, for introducing me to the world of engineering; Ms. Villalobos, Ms. Johnston, and Mr. Jacobowsky, for allowing me to skirt course prerequisites; Mr. Dunbar, for being an awesome physics teacher and robotics mentor; and Ms. Pennington, for supporting our physics competitions and helping me organize our school's physics club.