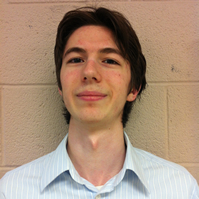 I've loved math as long as I can remember, thanks to my parents. My parents had many years' worth of issues of Kvant, a math and physics journal for high schoolers, at home. At first I only read math articles and solved math problems, then I started reading physics articles too. My older brother (who was on the US Physics Team in high school) taught me many interesting things and gave me physics-related things to think about.

One thing that made physics interesting for me (and for most people who had good teachers) were various physics toys, especially the less intuitive ones. Explanations of how a top works using angular momentum was really the first non-intuitive bit of physics that I was taught, and made me realize that you can't necessarily understand physics just using common sense and that abstract math-based formal manipulation is necessary.

Physics was the only other subject in school that had the same sort of logic as math. It was the only other subject that I could apply math to and not lose the rigor (once I chose assumptions to make). My 9th grade physics teacher spent a long time on the most basic mechanics, including derivations of various formulas for one-dimensional motion. It seemed at the time that he was going too slowly, but I now understand that this was the right approach.

I started taking USAPhO in 10th grade and finally made the team this year. I hope to learn a lot of physics at camp and to come to understand things better.