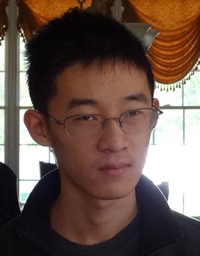 Almost everybody's story seems to start the same way: a love of math. My parents were no scientists, and there weren't any textbooks or science equipment lying around our house. But they quieted me down during long car rides with simple word problems, then cooler things like 1+2+...+100.

As an elementary schooler, I didn't get out much, instead spending summer trying to find patterns on a four-function calculator, drawing mazes, and reading and rereading The Big Book of Tell Me Why. In middle school, I trained speed above all, finding friends in Mathcounts. We derailed our math teacher, Mrs. Wilson's geometry class with every challenge problem in the book (can you split an obtuse triangle into finitely many acute ones?), and she graciously obliged.

In sophomore year, I took physics from Dr. Martino, and it felt like wonderfully solid ground. She, too, obliged whenever anybody asked where a formula came from, and I felt like an absolute wizard when I derived a few moments of inertia. I took the AP, passed, and that would've been the end of it.

But instead, thanks to my engineering teacher, Dr. Christoe, I narrowly qualified for the semifinal and failed, getting less than 20%. That was the luckiest day of my life, because it showed me there was much more to physics than I thought. These were tough puzzles to crack! And I already knew the principles, just had to get better.

In junior year I sat down to prepare the old-fashioned way: sneaking printed problems and Halliday/Resnick/Krane into chemistry class, and watching Walter Lewin on bus rides. Luckily, the reams of paper I used paid off, with free reindeer pizza!

Since then I've spent a while interning at MITRE, learned a little more math, and read more textbooks (all of which could be classified as freshman-year level; I learn slow!). After too many Morin problems involving infinite systems of Atwood's machines, I got a bit disillusioned with the puzzle aspect of physics - but there's always more cool stuff to learn. My mind's blown by some new application every week!

These days I'll rant about cool physics things to anybody who cares to listen. I'm more concerned with pedagogy than ever, constantly trying to think of the best way to present a derivation or motivate a problem's solution (and doing a lot of muttering to myself as a result). I also want to smooth the path to the Olympiads: my school easily has 25 people that could make the Semifinal. But how to get them motivated and interested?