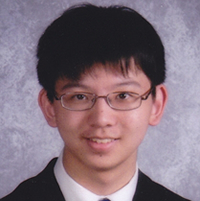 I have always been passionate about astronomy. Many memories of visits to the local planetarium were accompanied by my animated chatter and ensuing volley of questions. This anxious desire for explanations was usually satisfied by a teacher's response or a web search, but my fascination with the cosmos remained: the birth and structure of the immense Universe, along with the orbits of celestial bodies, continued to intrigue me without end. Yet I knew little about the physics behind these phenomena-only qualitative facts about various concepts such as gravity. My endeavors with an amateur telescope also provided me with similar opportunities to explore the night sky, and a lack of good lenses only left me pondering about space even more.

I joined Harker in high school and took my first physics course in my freshman year, in which I was immediately captivated by the elegance of the methods used to decipher the motions of both planets and projectiles. My past experience with math competitions, as well as a desire to challenge myself, prompted me to take the F = ma exam. I unexpectedly qualified for the semifinal exam, although my performance on the second-round questions was hardly spectacular. My placement into a calculus course that year also prepared me to take AP Physics C, which exposed me to more advanced concepts such as Maxwell's equations. I performed decently on that year's semifinal but was limited by the extent of my physics knowledge. This year, I independently reviewed many basic physics concepts and studied topics not covered in Physics C-mainly thermodynamics and relativity. After doing well on the semifinal, I was ecstatic to learn that I was accepted into the U.S. Physics Team.

Aside from competitions, I was also involved with astrophysics research last summer at the University of California, Santa Cruz. I studied the relationship between the activity of an active galactic nucleus, which typically emits radiation from an accretion disc generated by all the infalling, compressed matter extracted from the galaxy by its black hole, and the formation of stars elsewhere in the galaxy. This experience proved to be incredibly insightful and allowed me to conduct actual scientific research firsthand.

I would like to thank my AP Physics C teacher, Dr. Eric Nelson, for supplying me with the physics essentials that allowed me to progress to where I am today, and my research mentor at UCSC, Dr. Jonathan Trump, for inspiring me to continue pursuing physics research. I look forward to attending the training camp and working with all the other team members!