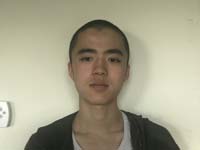 I started working on the F=ma competition when I was in 8th grade, on the suggestion of my dad. He helped me prepare for the F=ma, teaching me how to deal with problems much harder than those covered in my physics class at school. He had a lot of first-hand experience with physics competitions, albeit Chinese ones instead of the F=ma, so he was able to help me train to a level where I made the USAPHO. I didn’t do very well my first year, although I don’t know exactly how poorly I did (I think I forgot to finish the form...), but I did better the next two years, earning two Silver medals. I hope that, at the U.S. Physics Team, I can improve my abilities further over the two weeks. I especially hope that I can find some improvement in my lab skills, as I haven’t really done many physics experiments before. Sure, I’ve done some in class, but I wasn’t really good at them and have no clue how they might compare to labs at the U.S. Physics Team.

One reason that I like physics is that it allows me to figure out how things work. Knowledge of physics allows me to understand (at some level) why a book on a table slides differently when I push on it at different angles, and why the bouncy-ball's height keeps on getting lower and lower. It teaches me about the forces behind rocket propulsion, and also the strange effects of moving at near-light-speed. Another reason is just the wonder of physics in general—things such as black holes, gravitational waves, string theory, and quantum mechanics simply sound really cool. Even if I probably won’t get even remotely close to learning everything interesting in physics within the next few years, learning physics and working problems is still interesting and might allow me to understand some basic parts of these concepts. For example, learning about Newtonian gravity allows me to understand a non-general-relativistic picture of how black holes work, while general relativity (if I actually knew it) might give a more accurate picture of both black holes and gravitational waves (admittedly, the concepts make some sense with the conventional “fabric of spacetime” public image of general relativity, but I have no clue how accurate this picture actually is). An understanding of quantum mechanics would probably allow me to grasp some of the basic ideas of string theory (honestly, I have no clue how it would help anything if we assumed everything was made of vibrating strings), while an understanding of (basic, one dimensional) quantum mechanics itself can be obtained by taking a class (which I have actually done).