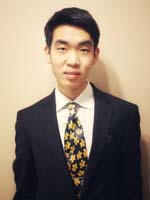 These two have always been important elements in my life, and in my opinion, they go hand and hand. Part of me has always been a curious child. During my primary school years, I spent countless pieces of paper in constructing model paper airplanes. I remember how I would bend the wings this way on one plane, and that way on another, and perhaps I would cut out flaps on a third. I had many hours of joy playing around, searching for possible improvements to my creation that could make it fly longer, faster, higher, better.

Now fast forward a couple of years, to the end of junior high. By this time, I had already a few years of competitive math experience. These years were invaluable to me; not only did I form many wonderful memories and friendships but also I discovered how to think, connect ideas, and recognize patterns. And thus, it was not too large a leap for me to enter into the realm of physics as well.

And in starting my study in physics, a whole new world revealed itself to me. Or really, it was the same world, but now its mystery had started to fade, as morning fog does before the rising sun. Now, I am able to understand my world better. I learned how my refrigerator worked. I could explain why a spinning quarter does not fall down. I understood why steam from the kettle burnt my hand so easily. And I discovered how the same forces which had controlled my paper gliders also caused me to feel sick as they tossed a hundred-ton jet through the clouds.

What I find most fascinating about physics is how it seems to encompass everything. Your microwave oven and refrigerator? That’s physics. The satellite network used by your GPS? Also physics. And the force behind our universe’s expansion? Still physics, even if it remains shrouded in mystery.

And perhaps, it is this last detail which bears the most important lesson. Physics is not an exact science. I did not know exactly why my paper creations flew, but I could still experiment around. And we may never know what the universe really is, or how it really works, but with physics, we learn to think, we learn to wonder, and we can get ever closer and closer to the ultimate truth. With physics, we are encouraged to try our best to understand; we can do nothing more, and we should expect nothing less.

And this is what compelled me to study physics. Even if tomorrow, a second Einstein were to turn our understanding of the universe on its head, physics’ gift to me of the logic and knowledge of how to solve problems would remain with me like a diamond, sparkling bright as ever.

I am incredibly honored to be part of the U.S. Physics Team again. I have amazing memories of last year -- the card games, the karaoke, the lectures and experiments, and all of the wonderful people which I had the fortune of meeting. I would like to thank Mr. Montgomery, who has so wonderfully organized the F=ma competitions at my school and whose enthusiasm in the classroom creates an incredible atmosphere. I would also like to thank my friends, family, and most of all my parents for unconditionally supporting me. I would not be who I am without you!