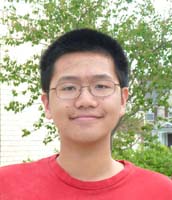 As a youngster curious about the world, I had fair success studying most topics I encountered. I possessed a general inclination towards math and science, but nothing really sparked my interest until freshman year when I discovered physics. Taking an AP Physics course at home, I realized the subject's clarity and it beckoned to me with its simplicity. Few things in life are as satisfying as seeing multiple terms in an equation beautifully cancel each other to produce an elegant relation. Through many physics textbooks, lectures, and problems, I have relished the challenges and joys it provides. In fact, I have written my own fundamental equation of the universe to describe the subject, Physics = Fun. From this one equality, I have derived Ohm's law, the Standard Model, and even chemistry (The proofs are trivial and left to the reader).

I'd like to give thanks to the many deserving people that helped me get to where I am today. Thanks to my family for their love and continuing support. My dad has provided invaluable guidance through my learning process and my mom has made me delicious food that turned into my kinetic and potential energy. I would also like to thank my teachers at Carmel High School for creating a great learning environment for physics. Finally, thanks to my friends for their encouragement.

This junior year I've been inundated with AP classes, SAT, and a healthy barrage of clubs. While sailing through it, I have found lots of time to indulge myself in physics even while not taking it in the classroom. I've also been experimenting in a small lab my dad and I set up at home, where I've been making measurements using oscilloscopes and shining lasers on diffraction gratings. I had a wonderful time at camp last year and now I'm excited to be coming back for second helpings. I look forward to learning more intense physics from the coaches, eating great food, and having lots of fun with other students!