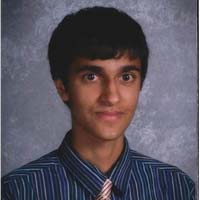 Like nearly all the other finalists, my interest in physics began with my love of mathematics. It's tempting to say that I was attracted to math because of its elegance or fundamental truthfulness, but really, I think I was just happy to have found an interesting subject that I was pretty good at.

My favorite part of any math contest was the time I spent afterwards with my friends sharing our progress, comparing methods, debating results, and reveling in the elegance of particular solutions. Often, we'd take up problems none of us managed to solve and unravel them as a group, filling entire boards with equations and diagrams.

In 2011, I attended the Canada/USA Mathcamp, a six-week long residential summer camp for high schoolers interested in math. There I learned how to play dozens of new board games, and developed an interest for the mathematics that exists outside the realm of contests.

In my first year of high school, I took my school's freshman physics class, a course which I realize in retrospect was a surprisingly rigorous introduction to the diverse world of physics. By the end of the year, we had covered kinematics, dynamics, electrostatics, magnetism and geometric optics without once invoking a derivative or integral. I left the class with significantly more insight into the physical laws that govern our universe and with a keen desire to learn more.

In my sophomore year I took AP Physics C, and although much of the course involved redoing previous year's material with calculus, the class also developed my love for the laboratory aspect of the discipline. In mathematics, the solution to a given problem is often the end of the story, but in physics we have the privilege of being able to test our theories in the real world. It's hard to describe the euphoria felt when you tune an oscilloscope and reveal exactly the pattern predicted by the math.

Last year I took the semifinal exam and was thrilled to find out that I qualified to the team. The time I spent at the camp were some of the most intense and most fun couple of weeks I've ever experienced. I am very excited to return this year, and I can't wait to meet all the other finalists.