Meanwhile a memorial of another kind was established to honor Lloyd W. Taylor of , a charter member and President of the Association 1943-45, who lost his life in a mountain climbing accident in 1948. This memorial was a manual of advanced laboratory experiments in physics. Authorized in 1951 but beset with numerous delays, The Lloyd William Taylor Manual of Advanced Undergraduate Experiments in Physics came off the press in June 1958. The book, produced by a committee chaired by T.B. Brown, contains experiments developed by teachers from their own laboratory experience. This volume was supplemented by the Novel Experiments in Physics (AAPT, Stony Brook, NY, 1964 and 1975).

Valuable committee reports and conference recommendations have appeared in AJP; lengthy items have appeared separately as occasional publications of the AAPT Executive Office. Among the significant AJP reports has been that of the Coulomb’s Law Committee, which appeared in January 1950. The Committee had been appointed in 1944 to examine the problems associated with fundamental concepts in electricity and magnetism, and its findings and recommendations were aimed toward eliminating textbook errors and encouraging clear and accurate formulations. 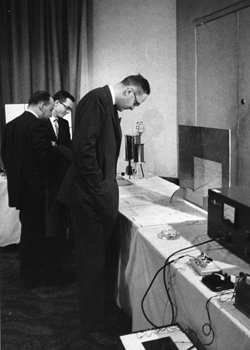 AAPT's Committee on Apparatus for Educational Institutions has a long history of contributions. Two of the early leaders were Sanborn C. Brown of MIT and William C. Kelly, then at the and later head of the Educational and Manpower Division of the American Institute of Physics. During 1956-57 an intensive study of apparatus used in physics teaching was carried out, and important recommendations were made. Drawings of apparatus, prepared under the direction of the Committee, appeared in AJP in 1960-63, and a book entitled Apparatus Drawing Project was produced in 1960. The author of the book, published by Plenum Press, was Robert C. Marcley, who was also responsible for the drawings appearing in AJP. Two additional publications came out in 1961, A Survey of Teaching Apparatus in Physics and a book of AJP reprints called Apparatus for Physics Teaching. [A later book with a similar title, Apparatus for Teaching Physics, published in 1972, consisted of reprints from The Physics Teacher (TPT). Another book with the same title and also consisting of TPT reprints was published in 1999.] 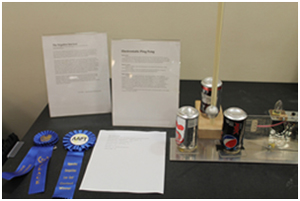 The Apparatus Committee arranged for the first Competition for New and Improved Apparatus to be held at the annual APS-AAPT meeting in 1959. Early competitions that followed were led by F.E. Christensen of St. Olaf College who arranged for subsequent descriptions of winning entries in AJP. Apparatus competitions were an important experimental physics feature of alternate annual meetings in subsequent years, while they are now typically held at each summer meeting.

The pattern of award categories has varied: in the first competition there were two, demonstration apparatus and apparatus designed for student laboratories. In some years the prizes were given without designation of category. With increased participation by high school teachers, the most recent divisions have been based not according to the purpose of the apparatus, but on the institutional level of the person submitting the entry. The prize money has been contributed by one or more laboratory equipment companies. From 1983 to the present, scientific has been the sole sponsor of the competition. Descriptions of many of the prize-winning entries have appeared in AJP and in two AAPT occasional publications: Apparatus Notes, July 1965-December 1972 (1974) and The AAPT Apparatus Competition (1984).

A very early reference source for demonstration lectures, also supported by NSF, was prepared by Harry F. Meiners of Rensselaer Polytechnic Institute (RPI), with Robert Resnick as co-chair of the AAPT Advisory Committee for the project. This very extensive and ambitious work was published by Ronald Press in 1970. It contained more than 2,000 photographs and line drawings, some 1,000 experiments in classical and modern physics, and essay articles on various aspects of physics demonstration experiments. In 1981 AAPT published the Demonstration Handbook for Physics by G.D. Freier and F.J. Anderson from the University of Minnesota. This was followed in 1982 by Wallace Hilton's Physics Demonstration Experiments at William Jewell College. Although Hilton's book went out of print in 1988, the Demonstration Handbook for Physics is still available. In 1987, a collection of articles on apparatus and ideas for teaching physics reprinted from The Physics Teacher was edited by Donna Berry and produced in the book A Potpourri of Physics Teaching Ideas. Also in 1987, a new physics demonstration experiments handbook was produced. This handbook, String and Sticky Tape Experiments, edited by Ronald Edge, has been a popular AAPT catalog item. 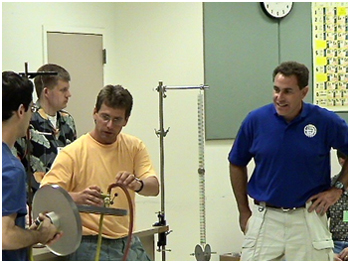 The Apparatus Committee has also sponsored the AAPT's longest running (several decades) summer meeting workshop on lecture demonstrations. This popular workshop has impacted many hundreds of physics instructors and has long been done in conjunction with PIRA (Physics Instructional Resource Agents). PIRA has long played a crucial AAPT role in bringing physics apparatus and its best use in labs and demonstrations to national meetings.

The AAPT has long played a strong role in enhancing physics laboratory instruction at introductory through advanced levels. Shortly after AAPT's NSF-supported Lab Focus-'93 at Boise State University (high school through advanced labs), the AAPT established a permanent Committee on Laboratories charged with the broad issues of quality laboratory teaching at all levels. While the AAPT Apparatus Committee primarily deals with the development of creative and reliable experimental apparatus, the AAPT Laboratory Committee is charged with pedagogical issues and the underlying physics of teaching laboratories. For many years the Laboratory Committee has sponsored a popular Advanced Lab Workshop at summer meetings with "hands-on" experiments in progress for participants.