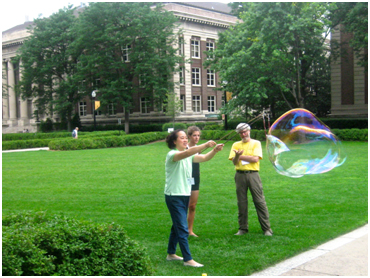 The pattern of AAPT meetings has evolved gradually. At the time of AAPT formation, the APS usually met in conjunction with AAAS in the interval between Christmas and New Year's Day, holding joint sessions with AAAS Section B (Physics). As we have seen, it was at one such meeting in 1930 that AAPT was organized. The early meetings of AAPT followed the same pattern: the annual meetings were held with both APS and AAAS from 1931 through 1939, then jointly with APS. Beginning with 1943, the annual meeting was shifted to January; thus there was no annual meeting during the calendar year 1942. (Similarly, the 17th annual meeting of APS-AAPT was held in Chicago from December 29-31, 1947, so in 1948 there was also no major meeting.)

In accepting invitations to hold summer meetings the Executive Board would set up a committee of conveniently located members to plan sessions. The programs were reported in the journal, but not enough officers were always involved to hold formal Executive Committee meetings. Several summer meetings in the East were held jointly with the Society for the Promotion of Engineering Education (SPEE, which in 1947 became the American Society for Engineering Education, ASEE).

The first official summer meeting sponsored by AAPT alone was held in Middletown, Connecticut in 1950, but the longer term pattern of such meetings was not established immediately. Meetings continued with ASEE, and in 1952 the summer meeting was joint with the University of Iowa Colloquium of Physics Teachers, which was organized annually by George W. Stewart. The 1953 Summer Meeting in Pittsburgh was strictly an AAPT affair, but the 1954 Minneapolis meeting, long remembered because it coincided with a solar eclipse, was joint with APS.

There was a problem of conflicting dates when APS and AAPT meetings were arranged independently, and a solution was proposed in 1956 when the secretary of AAPT was instructed by the AAPT Council to inform the secretary of APS that "AAPT will, beginning in 1958, plan to have its summer meeting in the fourth week of June, except when special circumstances, such as a joint meeting with APS or ASEE, make this undesirable." The 1961 meeting at Stanford extended through July 1, and summer meetings tended to alternate between the third and fourth weeks of June. The plan to hold consecutive meetings in widely different parts of the country (to better accommodate regional members) dates back to the meeting in Boulder, Colorado, in 1958.

In 1989 The American Physical Society decided to withdraw from the Joint Winter Meeting that had existed for more than three decades. AAPT was invited to be a joint participant in the APS April meeting. After considerable discussion, the Executive Board agreed to such participation on a trial basis for a limited period. The first joint April meeting was held in Washington, DC, in 1992. At the same time, the Board affirmed AAPT's intention to continue the January Winter Meeting, and to spread the three meetings more evenly throughout the year decided to change the time of the Summer Meeting from June to August. The first August meeting was in Orono, Maine, in 1993. However, in 1997, after years in which few AAPT members chose to attend the joint meeting, the AAPT Council decided to discontinue participation in the spring joint meeting following the planned 1999 joint meeting, which was also intended to be the APS Centennial Meeting.

Even without APS participation, the AAPT Winter Meetings have continued to attract a strong attendance. Workshops, which have often occurred during the two days immediately preceding the formal meeting, continue strong in number and in member participation. Attendance at Summer Meetings has also grown to such an extent that it is increasingly difficult to find colleges and/or universities that have adequate facilities to accommodate the many concurrent sessions and the increasing number of workshops. In the early 1990s it became necessary to limit the number of workshops offered for lack of facilities to accommodate them.

Subject to the newly revised AAPT constitution of 2000, the choice of national meeting sites remained a decision of the AAPT Council (made up of all AAPT Section Representatives and voting members of the Executive Board). In 2007 a standing Meetings Committee (MC) was established by the AAPT Executive Board to assist with recommendations, and the MC reports to Council regarding desired locations and formats of national meetings. To facilitate such recommendations to Council, the MC also gathered data on differing national meeting venues that appear most valued by the membership.