By late December 1931, a great deal of progress could be reported at the first annual AAPT meeting, which was held in with APS and AAAS. Those who became members prior to June 1, 1931 had been designated in the provisional constitution as charter members, and 461 people achieved this distinction.

Policies and guidelines designed to help mold the professional character of the Association were adopted at this first anniversary, and several important committees were appointed. Of special significance was the committee headed by William S. Webb to develop the ways and means of publishing a journal. The launching of this journal, called The American Physics Teacher, was a major topic of discussion by the Executive Committee at the second annual meeting, held in on December 30, 1932. 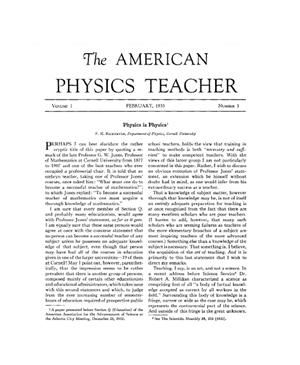 Webb and his committee had prepared a detailed report with specific recommendations, and it was possible to proceed rapidly. The first issue of The American Physics Teacher appeared in February 1933 under the editorship of Duane Roller, then at the . Its lead article was titled “Physics is Physics;” in it, F.K. Richtmyer pointed out that there are several aspects of physics research and teaching, either at the high school or college level—but they are still physics. In his opinion, “teaching is an art and not a science.” [F.K. Richtmyer, Amer. Phys. Teach. 1, 1 (1933)]. This article was reprinted in Phys. Teach. 14, 30 (1976).] Although then only a quarterly, the journal taxed the slender resources available; it was recommended that dues be raised from the original $2 to $3, and the change was later approved by a membership ballot.

According to the constitution adopted at the first annual meeting in New Orleans, the president’s and vice president’s term was to be one year, and neither could be elected for more than two consecutive terms. The first four presidents each served two years, and so did three later presidents: Lloyd W. Taylor, R.W. Gibbs, and J.W. Buchta. Frederic Palmer of had become vice president at the end of the first year, and he was elected to the presidency by a ballot sent to the members in January 1933. Palmer had been something of a pioneer in physics teaching: His article, “Some properties of atoms and electrons as measured by students” [JOS 7, 873 (1923)], a justification for and a description of an advanced undergraduate laboratory, had caught the attention of Paul Klopsteg, and Palmer was invited to participate in the founding of AAPT.

The first constitution provided for the organization of regional chapters, and the first chapter recognized was the Association of Physics Teachers of Western Pennsylvania and Environs (December 30, 1932). Two such chapters were organized during 1933, one in and one in . These two groups, formally recognized at the annual meeting held in in December of that year, were instructed to send representatives to the Executive Committee when they had attained a minimum of 15 AAPT members.

One particularly significant step taken at the 1933 meeting was to start the ball rolling to prepare an “encyclopedia” of lecture demonstrations; the idea was suggested by C.J. Lapp of the , and formally proposed by Frederic Palmer, president of AAPT at that time. Palmer was instrumental in seeing that it was carried through: “I just went ahead and paid the bills to the extent of somewhere around $1500,” he recalled. He also made available personnel and facilities at ; Richard M. Sutton of Haverford was the capable editor of Demonstration Experiments in Physics, published in 1938. The book was an immediate success; according to Palmer, “The royalties, the 15% royalties, amounted to enough so that I was paid back...within three years. It’s one of the best investments I ever made, I think.” Acknowledgement of the many who helped with preparation of the book can be found in its preface. 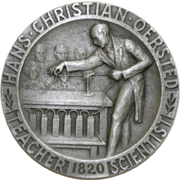 At the December 1934 meeting in , an anonymous donor offered to finance for a period of three years an annual award (a medal and a certificate) for notable contributions to the teaching of physics. To take advantage of this offer, a committee composed of Thomas Cope (of ), Homer Dodge, and David W. Cornelius (), was appointed to study the proposal and make recommendations the following year. This form of recognition was to become the Oersted Medal; the donor was later revealed to be Paul Klopsteg. The idea of naming the award for Oersted came from Frederic Palmer. Permission was granted by the Danish Royal Society, but considerable time was required for the design and preparation of the medal.

The first award, announced at the annual meeting in December 1936, was given posthumously to William S. Franklin (1867-1930). was described as a man of exuberant energy “who boasted that the teaching of physics was the greatest fun in the world.” He was known for his “frequent keen and clarifying comments” on papers presented at Physical Society meetings, and he wrote prolifically—25 volumes of textbooks, numerous research papers, many contributions on “Recent Advances in Physics” in School Science and Mathematics, and a popular volume of educational essays dealing with the beauties of nature. Much of his career had been spent at and MIT, and the Association placed bronze memorial tablets in the physics laboratories of both those institutions. His death had come in June 1930, the result of an automobile accident; otherwise, he surely would have taken a prominent role in the organization of AAPT.

Historical work on Oersted was carried out by J. Rud Nielsen; his article on the subject appeared in the American Journal of Physics 7, 10 (1939). President Richtmyer was able to report to the AAPT Executive Committee at the end of 1938 that for the medal designed by Dieges and Clust, “the motif suggested by F. Palmer, Jr., viz: Oersted, scientist and teacher, discovering electromagnetism in the presence of his assembled pupils, has been developed into one face. Thanks to the assistance rendered by J. Rud Nielsen, the scene is believed to be highly authentic.” The 1937 medal was accepted by the daughter of E.H. Hall. A. Wilmer Duff was the recipient of the 1938 award. The Oersted presentation was first made during an AAPT business meeting, not as part of a joint ceremonial session.